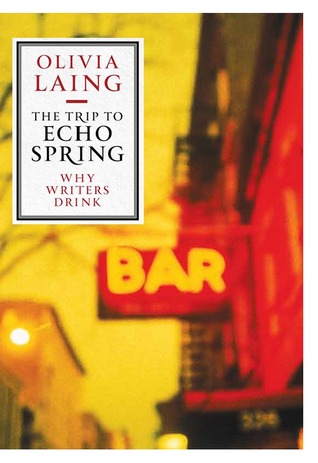 After reading The Lonely City in December I fell under the spell of Olivia Laing. In The Trip to Echo Spring she decides to try and figure out the connection between the work of a few noted authors and their alcoholism. I was initially surprised because Laing chose to focus exclusively on men, but she acknowledges this within the text and has her reasons for limiting herself to one gender. The authors she focused on are: John Berryman, Raymond Carver, John Cheever, F. Scott Fitzgerald, Ernest Hemingway, and Tennessee Williams.

Laing draws connections between the authors, their work and their drinking by following a route through the United States that has her stopping in locations that had significant impacts on all of the authors. This book is a combination of biography, history, literary criticism, and personal memoir. I was taking notes as I read because I felt like she just gave me a taste of all the men she profiled and I wanted to learn more. I wanted to dive into their biographies and read more of their work.

I’d definitely recommend the book, especially if you’re someone who appreciates reading about literary figures and their “processes.”

Stanley Fish makes big claims for the potential of well composed sentences. “They promise nothing less than lessons and practice in the organization of the world” (7). He claims that writing and enjoying a well written sentence is not a matter of simply memorizing and following grammatical rules, but rather, of grasping and practicing some basic forms that are common to many well-structured sentences. Practicing how to write good sentences, understanding sentence structure, and appreciating effective sentences are all tied up together. Fish communicates this in a pithy formula: “Sentence craft equals sentence comprehension equals sentence appreciation” (11).

Fish insists that mastering the basic forms that sentences come in is more important (at least initially) to good writing than the content of the sentences themselves. If you don’t know how to communicate something, the content of what you’re communicating won’t matter much. Fish offers the examples of the subordinating style (which ranks, orders, and sequences its contents in a highly organized way), the additive style (which adds one thought after another in a more informal style), and the satiric style (which is harder to define, but still tied to forms). These different styles are illustrated by sentences from great writers like Martin Luther King, Jr., Gertrude Stein, and Oscar Wilde. Fish then breaks down how these sentences are formed to show a structure that can be imitated and appropriated. This is stated in the form of a personal “theology”: “You shall tie yourself to forms and the forms shall set you free” (33). The content of a sentence is ultimately the point, but you can’t make that point unless you first master the forms.

In addition to being a guide to writing, the book functions as a primer on rhetoric and an introduction to literary criticism. The two chapters that deal with first and last sentences – focusing on what novelists can do with the first and last sentence of a book – are guides to and examples of meditative reading, turning sentences over until every sense has been drawn of them. The book may not be for everyone. I can see how it could come off as the kind of over-analysis that kills the joke or ruins the mood. However, I find Fish’s emphasis on intuiting the logical structure of sentences over memorizing grammatical rules very helpful. He uses excellent examples – I particularly enjoyed the sentences he included from John Donne and Anthony Powell – and his love of good writing is contagious.