Red Clocks is a novel told from the alternating perspectives of four different women. Set in coastal Oregon in a not-so-distant future we are now in a world where abortion is illegal and attempts to have one result in you being charged for murder. Efforts to obtain legal abortions in Canada are blocked thanks to the “Pink Wall” – the Canadian government will return anyone trying to cross the border for illegal purposes. Connected with this, adoptions are in the process of being limited so that only two-parent households qualify. With these reproductive restrictions come understandable stress and risk.

The book starts off a little disjointed because you’re not given the names of the main characters right away. As the book progresses, though, you get a better understanding for why Zumas chose this tactic. Interspersed throughout the accounts you also get excerpts from a biography-in-progress about a 19th-century female polar explorer. These excerpts of the explorer’s life provide an interesting parallel to the limitations society continues to place on women in the present day.

If you’re a fan of The Handmaid’s Tale (book or show) I would definitely recommend this book to you. This was a timely read… some might find it a little too close for comfort, but there’s a motivating message behind the text.

I loved this collection of short stories and am definitely an Ausubel fan. I don’t even know how best to attempt to summarize them other than that I *so* enjoyed reading this book.

Some blurbs from Amazon:

“Excellent and peculiar… Ausubel’s imagination…wants to offer consolation for how ghastly things can get, a type of healing that only reading can provide. All 11 of these stories are deeply involving.” –New York Times Book Review

An inventive story collection that spans the globe as it explores love, childhood, and parenthood with an electric mix of humor and emotion.

I’ll certainly be reading more of her work 🙂

First of all, yes, Delia Ephron is Nora Ephron’s sister. Secondly, this book sells itself as something of a mystery and while it is, in a sense, I was a bit disappointed because I feel like it gave away most of the mystery pretty early on. Told from the perspective of four different people (the partners in two sets of couples) we see the story unfold through four lenses that are biased in their own unique ways. It’s clear that not all the relationships survive but we don’t fully understand why until the end…

For more context, here is the Goodreads summary:

New Yorkers Michael, a famous writer, and Lizzie, a journalist, travel to Italy with their friends from Maine—Finn; his wife, Taylor; and their daughter, Snow. “From the beginning,” says Taylor, “it was a conspiracy for Lizzie and Finn to be together.” Told Rashomon-style in alternating points of view, the characters expose and stumble upon lies and infidelities, past and present. Snow, ten years old and precociously drawn into a far more adult drama, becomes the catalyst for catastrophe as the novel explores collusion and betrayal in marriage. Set on the sun-drenched coast of the Ionian Sea, Siracusa unfolds with the pacing of a psychological thriller and delivers an unexpected final act that none will see coming.

So many people highlighted this collection of essays as one of their top humorous reads that I gravitated toward it after realizing I needed a break from all the negativity in the news. Irby is a talented essayist who is able to tackle topics you wouldn’t expect with an openness and sense of humor you have to appreciate. We explore her romantic history, her family life, job performance, her “hate” relationship with her cat, her physical limitations… there’s a lot of sass in this book and there is a bitter edge to her humor that you need to kind of gird yourself for.

It wasn’t the laugh-out-loud book I was hoping for, but I certainly had more than a few audible chuckles while reading. Irby doesn’t keep much back so if you decide to grab this well-blurbed book (praise from the likes of: Roxane Gay, Lindy West, Jenny Lawson, Rainbow Rowell) know that the content and language is in R-rated territory 😉

Goodbye, Vitamin was a quick read that added a light-hearted touch to a serious topic. Our protagonist, Ruth, has returned home after a break-up. While she’s at home her mother makes it clear that she would appreciate Ruth sticking around to help care for her father. Ruth’s dad has been dealing with memory loss and it has gotten to the point where he’s no longer able to work as a history professor. Ruth isn’t exactly eager to take on the role of caretaker but when she sees the reality of the situation she can’t pretend to turn her back on it.

Told over the course of a year we see how Ruth navigates her new family dynamic. This is a well-written book that won’t take you long to knock out.

This unique “memoir” focusing on the relationship between Nelson and her partner was beautifully written. This is so much more than a memoir because Nelson is also deconstructing things like gender, love, family, and identity. Interspersed throughout her own story Nelson refers to and quotes a number of other intellectuals. The breadth of her knowledge is impressive and when she references these thinkers she does so by utilizing the margins of the book. Initially I was confused by this formatting, but then I acclimated and appreciated the fact that it helped keep the body of the text clean.

The Argonauts isn’t the kind of book you can just breeze through because there is so much to unpack but it’s well worth your time to pick it up.

The Monsters of Templeton by Lauren Groff
(Hachette Books, 2008, 384 pages)

I was initially turned on to Lauren Groff thanks to Fates and Furies. After reading it I remember making a note that I wanted to read her debut novel, The Monsters of Templeton, but the book summary didn’t really sound like “me.” There’s a lake monster (seriously, that was enough to give me a moment’s hesitation) and then a journey through the history of a small New England town. Even though I hesitated to grab this, I’m so glad I finally decided to give it a go because I thoroughly enjoyed it. As I was reading I found myself comparing Groff’s writing style to John Irving, which is high praise (especially coming from me who would essentially follow Irving anywhere #literarycrush).

The novel is told from the perspective of Willie Cooper who has returned home after an affair with her archaeology professor. While she tries to lay low at home her mother reveals to her that the story of Willie’s conception she’d been raised to believe was true (scandalous though it was) was a lie. Now she has to unravel her family history to try and uncover her real father. She appreciates this challenge and is surprised to find how much she discovers about her family tree and the history of the town.

If you’re looking for a unique story with fantastical elements interspersed in the history of a small town The Monsters of Templeton won’t let you down. Also, if you’re just a fan of Groff and/or good fiction, this is a book for you.

This book jumped up on my to-read list after I was going through potential titles for our campus book club. The Fortunes is told from the perspective of four different characters at four different points in American history. Through their eyes we see the reality of the Chinese American experience in this country. The book begins shortly after the Gold Rush when Chinese immigrants were recruited to build railroads and ends in the present-day with a couple in China in the process of adopting a child.

The Fortunes was an engrossing read that inspired me to want to learn more about the issues and people that were portrayed in the book. I definitely recommend it to those who are fans of literary fiction, historical fiction, multi-generational novels, the immigrant experience, American history… you get the picture 🙂

The saga continues… ha! But seriously, I’m ready for volume 9 and I wish I didn’t have to wait until October for its publication.

The family drama continues as Hazel and her parents try to survive in the midst of a chaotic universe. The social commentary in Vaughan’s work combined with Staples’s amazing artwork  make this a series not to be missed. I’d definitely recommend Saga if you haven’t already picked it up. Sure, there are parts that are graphic, but there’s so much packed into each volume! 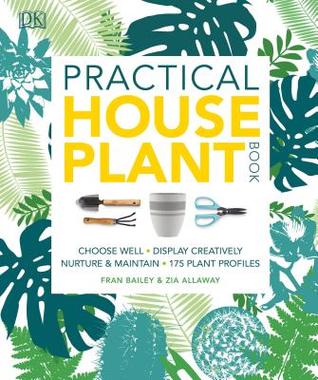 I’m always looking for ways to give my house a homier feel. Since I managed to kill the last houseplant I had this seemed like a book that was right up my alley. Things are broken down into sections so you get a feel for how to organize plants, what plants are best suited for different environments, tools you’ll need, and crafty things you can do yourself. It was helpful that this was such a visual book (you can always count on DK for that). I think I got the most mileage out of the section that breaks plants down based on type and highlights the level of difficulty for their care. I now have an incredibly long list of plants I would love to nurture in my house!

I wasn’t a huge fan of the craft section BUT it did help me to see that some of the looks I might go for are things I can try and do on my own. If you’re a houseplant novice this is a great introductory text for you. I’m excited for my next visit to Fahr Greenhouse to see what catches my eye… if you see more houseplant books on the blog in the near future you’ll know I’ve been moderately successful 😉