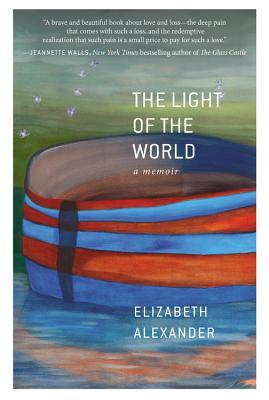 The Light of the World by Elizabeth Alexander
(Grand Central Publishing, 2015, 209 pages)

This memoir about what it’s like to unexpectedly lose your husband was beautifully written, poignant, and heart-breaking. Alexander is a poet and that background shines through in the way she writes this memoir. Much like when you read poetry there would be sections of the book where I would finish and then just have to stop and reflect on what I’d read.

Even though the subject matter is sad it makes you appreciate the people you have in your life and the fact that no day is guaranteed to us. It also shines light on the fact that you WILL survive your grief. Just because someone is no longer physically beside us on this earth doesn’t mean their presence and the impact they had on your life disappears. It’s tragic, yes. But the fact that they have played a role in influencing the person you have become remains a beautiful thing to hold on to.

To be honest, The Undertaking caught my eye because I’m fascinated by books that talk about death and dying. This collection of essays took a different approach than what I’d anticipated because I went in expecting more darkness and humor and found myself in the presence of thoughtful essays that encouraged me to think more about death and the role it plays in our lives.

Thomas Lynch is an established poet in addition to being the funeral director in the small town of Milford, MI. His way with words and his lifelong immersion in the world of death (his father was also an undertaker) gives him a unique perspective on how death impacts the lives of the living. Each essay in the book lends itself to reflection. There is humor interspersed throughout, but there’s depth here. I took my time while I was reading.

A few of my favorite essays include: “Crapper,” “The Right Hand of the Father,” “All Hallows’ Eve,” and “Tract.” Don’t let the subject matter deter you from picking up this book. It’s not a doom and gloom read, it’s insightful and well worth your time.

You come to Paul Kalanithi’s book, When Breath Becomes Air, knowing that it’s going to have a sad ending. Paul was a neurosurgeon at Stanford who was diagnosed with terminal lung cancer. Suddenly he transferred from the role of doctor to that of patient and recognized that his previously abstract way of understanding death had suddenly become very real.

After the diagnosis Paul made the decision to begin writing this book, in addition to making the decision to become a father. Paul doesn’t shy away from his life simply because his death is imminent. As a doctor he was always facing how close death is to all of us but the inevitability of death can’t keep you from living the life you you want.

This book definitely made me think, and tear up while I was reading it. Facing your mortality is something we’ve become conditioned to try and avoid. Death is scary. Especially when you consider what and who you’ll be leaving behind. The part that got to me most was when Paul wrote about his daughter and what he wanted her to know about the role she played in his life even though their time together was almost unbearably brief.

This small, contemplative book will definitely keep you thinking about it long after you finish. It’s obviously not a light read, but it is a good one.

In this book Christopher Hitchens’ writes about his fight to be one of the small percentage that would overcome his diagnosis.  This famous orator is struck down with esophageal cancer when he begins his American book tour.  Hitchens’ refers to his last months as “living dyingly”.  I found this book jolting at times.  It was hard to read about the amount of pain involved in his life the last 19 months.  He is realistic about his diagnosis, however, he retains a hopeful enthusiasm for alternative treatments.

He points out how simple questions can be taken so literally when one is faced with a limited number of days left in their life.  A question, such as, I’ll be in town next week will you be around to meet?, takes on a whole new depth in this context.

His wife, Carol Blue writes an afterword in the book recounting some of their “flawless” days.  She misses the sound of his voice, the variety of tones that his voice made throughout the day – from the first waking low octaves to the night time whispers.

A Reunion of Ghosts by Judith Claire Mitchell
(HarperCollins, 2015, 416 pages)

A Reunion of Ghosts by Judith Claire Mitchell is a novel about three, forty-something, Jewish sisters named Lady, Vee, and Delph. The sisters live together in a rent-controlled, family apartment on the Upper West Side of Manhattan. The year is 1999. Lady, Vee, and Delph decide that on December 31, 1999 they will all commit suicide. Suicide runs in the family so it is not something that they fear or take lightly. Before they die, the sisters decide to write a single suicide note and include the history of the family. The family history includes their Jewish great grandfather who invented the gas that was used in the gas chambers of concentration camps.