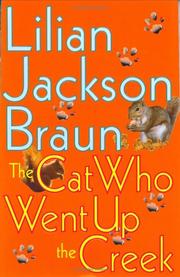 The Cat Who Went Up the Creek is the 24th novel in Lilian Jackson Braun’s Cat Who series. This series features journalist, James Mackintosh “Qwill” Qwilleran, and his two Siamese cats, Koko and Yum Yum. In each of the Cat Who novels, there is a murder which is solved with the assistance of Qwill’s two cats. In The Cat Who Went Up the Creek, Qwill and his cats are staying  at the Nutcracker Inn on Black Creek. During his stay, he finds a body floating down the creek.  There is more death and mayhem to follow.

Lilian Jackson Braun (1913-2011) wrote 29 Cat Who novels. Ms. Braun wrote the first Cat Who novel in 1966 and the last one in 2007. Ms. Braun took an 18 year break between the first three novels in the series and the last twenty-six novels in the series. She thought that her novels were not appreciated because her novels do not feature offensive language or sexual escapades. However, the premise of cats helping to solve mysteries was just too good to abandon.

After reading several Cat Who titles, I realized that I wasn’t really reading these novels for the mysteries, which are mediocre. I was reading to find out what was happening to the characters that I met in the previous novels. The characters become like family members. However, the reader should be careful about becoming too attached to a character. That character may end up dead in the next novel! This series is recommended for anyone who wants a quick read and/or enjoys quirky characters.