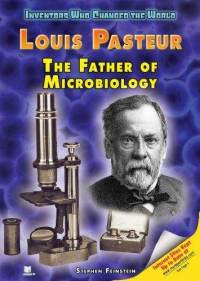 This is a biography of the famous scientist and inventor, Louis Pasteur. I read this book with my kids and we had interesting discussions. They earned minutes to play online games and I got to write a review for our blog!

The book gave accounts of Pasteur’s life from birth to death and highlighted his various accomplishments. His research and discoveries helped tremendously in the field of medicine. The author presented many medical history stories and facts. I especially loved that content! But let’s talk about alcohol. . . We all know pasteurization was named after Pasteur, but did you know it resulted from a request in 1863 by Emperor Napoleon III, the ruler of France? Winemakers were reporting their wine was often spoiled for unknown reasons. Pasteur took on the challenge. He spent the next three summers working to save France’s most important industry. He invented the method of killing bacteria in liquid: pasteurization.

Another interesting fact that relates to alcohol is that Pasteur studied the fermentation of beet-root alcohol. He presented a paper with ideas that came to be known as the germ theory of fermentation. He was the first scientist to grasp the connections between biology, chemistry, and medicine. I really enjoyed this book. If you only remember a few of Pasteur’s major discoveries, it’s time to get to know him better.