What an amazing book!  My grandson who is 3 3/4 years old (or so he says) fell in LOVE with this book.  It is described as “the definitive pop-up book.”  The book was a gift from my aunt to our grandchildren and when I opened it, I never expected such detail in a pop-up book.   Each page is a work of art and there are smaller pages within each page to open for yet another small pop-up.  The book goes in to detail about the age of dinosaurs and how we know of their existence today.  A definite must for the dinosaur-lover in your family.  Because of the intense detail, I would not recommend it to very young children.  My grandson sits on the couch with me to look this one over.  We read every word on every page – and I mean EVERY word 🙂

This was my first venture into the “horror” genre – I hate being scared but I felt like easing into it by way of a popular young adult title would be my best bet.  I chose to listen to the audiobook of this title and found myself accidentally speeding (whoops) as the story was being read because I got anxious.  (Haha, I was also driving in the dark a lot of the time which didn’t help).  The story is nowhere near Stephen King in terms of terror and gore but it definitely has suspense and some pretty graphic encounters.

The story is told through the journals of a man by the name of Will Henry.  The journals are discovered in a nursing home in 2008 after Mr. Henry passed away, the director who found them was searching for some relation to Will Henry but after reading through these journals for guidance he convinced himself they were a work of fiction.  The journals begin in 1888 with 12-year-old Will Henry working as an apprentice to Dr. Pellinore Warthrup, a man who specializes in monstrumology (the study of monsters) (*and yes, if you do the math, this would make Will Henry 132 at the time of his death – you’ll find out why if you read the book ;)) .  Will had recently been orphaned and was taken in by Dr. Warthrup, immersed in a world where the made-up notion of monsters very quickly proves itself to be fact.  He soon finds himself fighting to protect his town and other helpless victims from a pack of monsters that feast on human flesh.  The things that “go bump in the night” are very real indeed. . .

The Monstrumologist is the first book in the Monstrumologist series and I’ll definitely check out the ones that follow it.  If you’re nervous about trying the horror genre, I’d recommend this title as a way of getting things started (though prepare yourself for some gory details).  I doubt I’ll ever work up to Stephen King fiction, but at least I can say I’ve tried something new 🙂 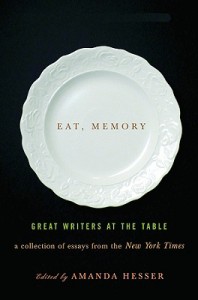 This book is a compilation of 26 essays compiled by the former food editor of the New York Times Magazine.  Some of the essays are followed by a recipe that was relevant to the story.  These definitely aren’t all “feel good” pieces, rather they are “food-inspired” essays that directly pertain to some specific time/place/event in the author’s life.

I found some of the essays more engaging than others, but overall I wasn’t wowed by this collection.  When I read about food I want to read those “feel good” type of stories.  I did appreciate some of the recipes included, but I felt that for the sake of continuity and uniformity each essay should have included a recipe.  I’m sad I can’t recommend this very highly because when I picked it up, it looked great.  If you enjoyed reading the “Eat, Memory” column in the New York Times Magazine you might have a better appreciation for this book than I did. 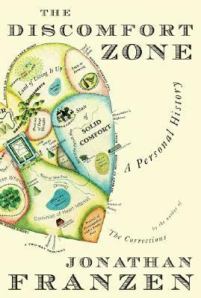 I thought I would read Franzen’s memoir before I read his latest book, Freedom.  The Discomfort Zone: A Personal History is a collection of six essays which span his childhood, adolescence and adult life.  Readers get glimpses of his personal life, discovering how he grew up to be the writer he is today.  Franzen is brutally honest and hilarious at times.

Each of the six essays is a stand-alone story, so the book doesn’t have a cohesive story line to connect them.  I found the stories on the “Peanuts” cartoon and high school pranks too detailed and somehow dull.  I even put the book down for a few days to read something else.  The two stories I enjoyed most were the story about the sale of his mother’s house (located in Webster Groves) after her death and the final story on how Franzen became a  birder.  I recommend the book only if you are a Franzen fan.

Georgia Gray is the executive chef at a hip New York restaurant.  She’s newly engaged, she loves who she works with (well, most of the people she works with), has a dog that adores her, and two best friends she manages to see regularly despite her long hours in the kitchen.  What could go wrong?  Well, if you get a horrible review compliments of an angry restaurant critic the answer is: A Lot.  Quickly.  Shortly after the bad review is published, Georgia finds herself fired and, much to her surprise, single.  Her dreams of one day opening a restaurant (or three) of her own have been dashed and she has a hard time finding the positives in life.  That is, until she reaches out to her friend Claudia, a restaurateur in Italy whom Georgia had worked with a few years previously.  Claudia immediately tells Georgia to head to Italy and help her open a new restaurant.  Things are looking up. . .

Georgia’s time in Italy is focused on regaining a sense of who she is, was, and wants to be – in both life and love.  This was a fun, light-hearted read (great for if you happen to be traveling).  Also, if you love reading about food (which I do), this has plenty of great food/cooking references that you’ll appreciate (complete with a supportive blurb from Giada de Laurentiis on the cover).  Bon appetit.

No Ordinary Time by Doris Kearns Goodwin is a fact-filled recounting of the lives and times of Franklin and Eleanor Roosevelt.  The book chronicles the period from May 1940 when Hitler invaded Holland, Luxembourg, Belgium, and France until the end of World War II in 1945.  In 1940, Franklin Roosevelt was in his second term as President.  Eleanor Roosevelt was augmenting the traditional role of First Lady by advocating for civil rights, women’s rights, and various other social reforms.  The reader journeys with the Roosevelts through the beginning and ending of World War II and the election of Franklin Roosevelt to unprecedented third and fourth terms in the White House.  Along the way, the reader is given a “behind the scenes” look at the decisions made during World War II.

No Ordinary Time is a mini United States history lesson.  For example, did you know that gasoline was rationed during WWII not to save gasoline, but to conserve rubber which was needed for the war effort?  Did you know that Franklin Roosevelt was instrumental in the birth and the naming of the United Nations?

While I enjoyed No Ordinary Time, it was easy to get overloaded with the quantity of names and events.  Among other sources, Doris Kearns Goodwin used manuscripts, letters, diaries, memoirs, and numerous personal interviews to research this chronicle of the Roosevelts.  I would recommend this book to anyone who is interested in World War II, Franklin Roosevelt’s presidency, Eleanor Roosevelt’s time as First Lady, or the relationship between Franklin and Eleanor. 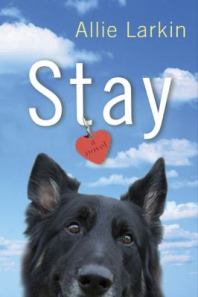 OK – now this book was really cute!  I am a total dog lover and the bigger the dog, the more I like him 🙂  So when I read the cover and it had a big dog in it, I was sold.  It’s really a love story drawn out for an entire book.  Savannah, lovingly known as “Van,” has been in love with Peter but Peter is in love with Van’s best friend, Janie.  After Peter and Janie’s wedding, Van feels sorry for herself while drinking Kool-Aid-Vodka cocktails and watching reruns of Rin Tin Tin.  Of course that combination can only lead her to purchase a dog over the internet.  This is where the story really picks up – Dog meets owner (hahahahaha) – Owner meets handsome male veterinarian (XOXO) – Complicated relationships (sigh) –  anyway. . . it’s a cute read.  My favorite character in the book????  Joe the Dog 😉