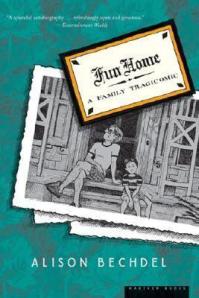 I’m a definite fan of graphic novels and found Fun Home to be an interesting book.  It’s a nice change of pace to have something visually stimulating while you read.  The book got a lot of acclaim, rated a best book of the year by publications like Time, The New York Times, Publisher’s Weekly and the St. Louis Post Dispatch while also being a National Book Critics Circle Award finalist.  Fun Home deals with a number of issues, all revolving around the relationship Alison (the author) has with her father.  Suffice it to say, there’s a reason this graphic memoir uses the term “tragicomic” in the subtitle.

Fun Home could be viewed as a coming out story, for both Alison and her father.  The author had always noticed there was a distance between her father and the rest of her family, it was only shortly before his untimely death (which also raises a number of questions) that Alison learned that her father had been a gay man living a straight life.  Fun Home seems to be Alison’s attempt at getting a better grasp of who her father was, offering a marked contrast between the life he felt he was forced to lead and the freedom she had to explore and openly claim her sexuality while in college.

Point to this when people argue graphic novels are “just comics.”  The depth and emotion they can express, as can be seen in Fun Home, speaks to that.